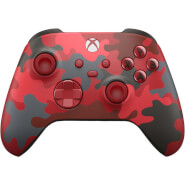 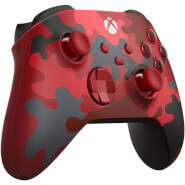 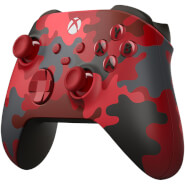 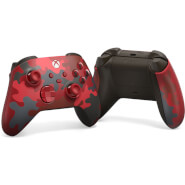 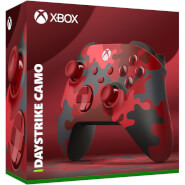 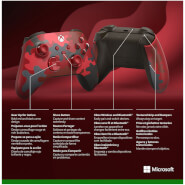 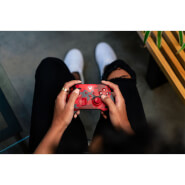 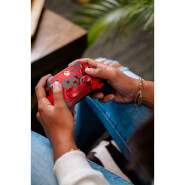 Take your gaming experience to the next level with the Microsoft Xbox Wireless Controller in the daystrike camo design pattern. Its sculpted surface is designed to ensure comfort when playing for long hours while the textured grips and hybrid D-pad with raised edges help you stay on target. Quickly capture and post your greatest moments with the dedicated Share button. Configure the game buttons to fit your personal play style and comfort using the Xbox Accessories app. This controller works with a variety of devices, including the Xbox Series X|S and Xbox One consoles, Windows 10 PCs, and Android devices. Wirelessly pair the controller to Xbox devices and Bluetooth smartphones and tablets, or use a USB Type-C cable for a wired connection. The Xbox Wireless Controller operates for up to 40 hours using two AA batteries.

Quickly capture and share screenshots, videos, and more with the Share button to show off your greatest gaming moments.

Textured grips on the triggers, bumpers, and back case help to maintain accuracy during fast-paced games. The hybrid D-pad features a raised cross for enhanced performance.

With support for both Xbox Wireless and Bluetooth technologies, you can wireless pair the controller with Xbox Series X|S, Xbox One, Windows 10 PCs, and Android devices. Support for iOS devices is scheduled to be added at a later date. Plug almost any wired headset in to the 3.5mm audio jack.

The Xbox Accessories app is pre-installed on Xbox Series X|S and Xbox One consoles and can be downloaded for free for Windows 10 from the Microsoft Store. With it, you can customize your controller's button configuration and save them to multiple profiles to suit different games, players, and styles.

The Xbox Wireless Controller is designed to work for up to 40 hours using two AA batteries.