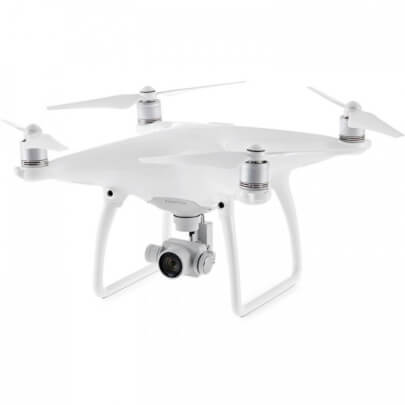 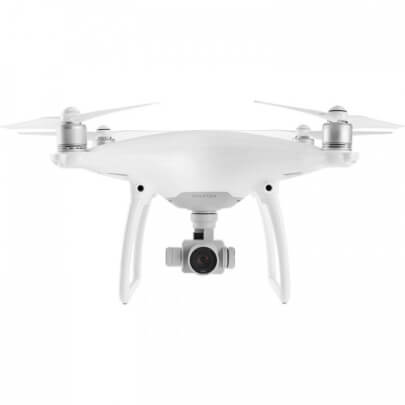 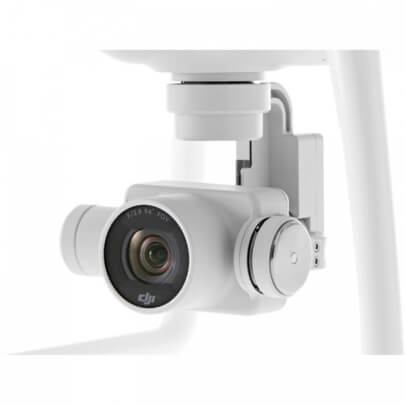 A sleek new design with magnesium unibody construction, obstacle avoidance sensor, dynamic range enhancing video modes, and a two-point-of-contact gimbal mount are just some the features DJI have introduced with the Phantom 4 Quadcopter. Thanks to improvements in efficiency as well as its intelligent power management system, the quadcopter boasts up to 28 minutes flying time. Its camera shoots DCI 4K (4096 x 2160) video at 24/25 fps and UHD 4K (3480 x 2160) at up to 30 fps. There is also a 120 fps mode in 1080p resolution for slow-motion effects. The camera will also take 12MP still photos in either DNG RAW or JPEG, with single shot, HDR, burst, and time-lapse modes to choose from.

Because of the complexity associated with multi-rotor aircraft, the Phantom 4 relies on a GPS-based navigation system, drawing upon up to 24 satellites to maintain flight stability and provide other features. While fully manual operation is possible, most users, especially videographers hoping to get the smoothest possible shoots, will opt for one of the GPS-assisted modes

Vision Positioning System uses dual downward-facing cameras and dual ultrasonic sensors to provide comparable stability function indoors or relatively close to the ground (up to 32.8') as GPS does outdoors. This technology allows the Phantom 4 to hold its location, stop when the controls are released, and quickly respond to pilot commands, even when GPS is unavailable

The TapFly mode lets you use the power of touch for easy flight control. With the mode activated, you simply need to tap on the screen of a connected smartphone or tablet, and the Phantom 4 will begin to fly in that direction. If an obstacle appears in flight path, the quadcopter's auto sense-and-avoid feature will either bring the camera to a stop or avoid it completely

Switch the flight mode to Sport to enjoy a new level of thrill, enabling a top speed of around 40mph. This allows you to capture faster moving subjects than with previous generation Phantom models, such as motor vehicles or downhill skiers. To bring the camera a halt at these faster speeds, the Phantom 4 features active braking

Beginner flyers should build confidence by flying low and close. Beginner mode prevents new pilots from going beyond their skills. An adjustable maximum height and distance can also be set when flying skills improve

GPS Navigation and Vision Positioning Speeds up to 40mph, flight time up to 28 minutes Records UHD 4K Video at up to 30fps Beginner Mode for Quick Learning