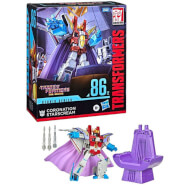 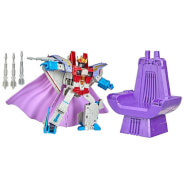 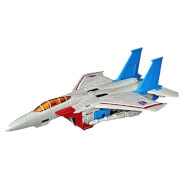 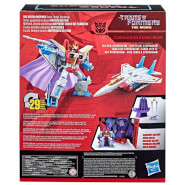 Studio Series has always allowed fans to reach past the big screen and build the ultimate Transformers collection inspired by iconic movie scenes from the Transformers movie universe. Now, the Studio Series line is expanding to include the epic moments and characters from the classic The Transformers: The Movie, bringing fans a whole new series of screen-inspired figures to collect! (Each sold separately. Subject to availability.)

This Studio Series 86-12 Leader Class The Transformers: The Movie-inspired Coronation Starscream figure converts from robot to jet mode in 29 steps. Comes with 2 null rays, 2 shoulder armor pieces, crown, cape, and throne accessories. Remove backdrop to showcase the Coronation Starscream figure in the All Hail Starscream scene. In the All Hail Starscream scene, Starscream holds a coronation asserting his rise as king of the Decepticons, until Galvatron disrupts the proceedings and ruins his big day. Pose the figure out and re-create this classic movie moment!

Leader Class figures are 8.5-inch collectible action figures inspired by iconic movie scenes and designed with specs and details to reflect the Transformers movie universe, now including The Transformers: The Movie!

Figure scale reflects the character’s size in the world of The Transformers: The Movie. Figure and packaging are inspired by the iconic All Hail Starscream scene

Coronation Starscream figure features classic conversion between robot and jet modes in 29 steps. Perfect for fans looking for a more advanced converting figure. For kids and adults ages 8 and up