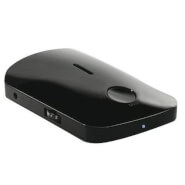 Featuring 360-degree radar and laser detection and two operating modes, the Cobra iRadar helps you steer clear of radar and laser guns and warns you of upcoming snares with audible alerts. When it is paired with an Android smartphone using the exclusive Cobra iRadar app (free on the Android Market or Amazon app store), you'll get alerts to speed and red-light cameras, known speed traps, and dangerous intersections. With the app, you'll also get access to Cobra's national AURA Camera and Driving Hazard Database.

Using advanced technology, the iRadar provides you with full 360-degree radar and laser detection. This means you'll be covered on all sides of your vehicle, without any gaps or blind spots. For every signal that it detects, the iRadar emits a clear alert tone, indicating the location and proximity of the threat.

The iRadar features two different modes: city and highway. If you're driving in an urban area, you can toggle to city mode to filter out annoying false signals caused by automatic doorways. If you're traveling at high speeds, toggle to highway mode and get higher detection sensitivity and immediate alerts.

When paired with an Android smartphone, the iRadar offers even better detection service. Using an exclusive, free-to-download Android app, you can wirelessly link your iRadar to your smartphone and enjoy enhanced features. The app provides you with a visual display of your alerts, telling you both the type of alert and its proximity to you. It also displays a history of your alerts on a map, allowing you to see the time and location of each detected signal.

The iRadar app also gives you access to AURA, Cobra's exclusive camera and driving hazard database. AURA uses GPS technology to alert you of photo-enforced areas as you approach them. The alerts are delivered based on your speed: The faster you are going, the more advanced the warning is. This gives you ample time to react and slow down. The database boasts tens of thousands of entries and is updated every 12 hours by Cobra's team.