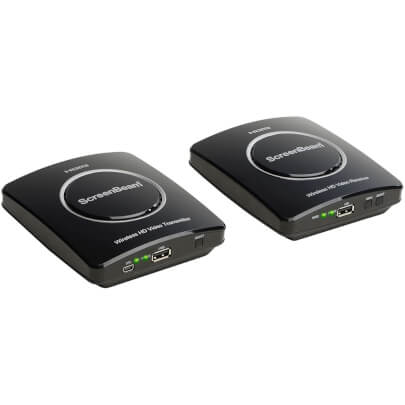 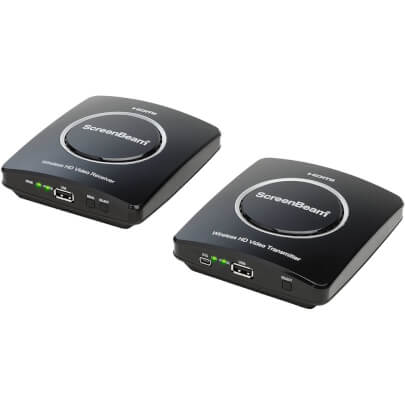 Wirelessly transmit high-definition video up to 100' away with the Actiontec MyWirelessTV2 Multi-Room Wireless HD Video Kit. This receiver and transmitter combination supports HDMI connectivity and has built-in dual-band 802.11n Wi-Fi. HDMI allows you to interface video sources such as Blu-ray players and gaming consoles. In addition to 1080p video, this kit supports the pass-through of 5.1-channel surround sound when the receiver is powered off, and non-compressed LPCM signals. For simplified connectivity, this plug-and-play system includes two HDMI cables.

Compatible with most HDTVs with an HDMI port

As well as most HDMI-enabled cable/satellite set-top boxes, DVRs, PVRs, Blu-ray and DVD players and game consoles for wide-ranging use.

Allow you to wirelessly connect your compatible HDTV to a compatible media device from up to 100' away, even through walls and floors, so you can eliminate cable clutter.

From an HDMI-enabled media device to a remote HDTV for multiroom entertainment.

As well as 5.1 and uncompressed linear PCM audio signals, so you can enjoy vivid, immersive visuals and crisp, enveloping sound.

Optimizes performance based on the current wireless operating environment.

With your existing remote via the included IR blaster cable for ease of use.

Wirelessly transmit live TV and HD video up to 100 ft. Use your existing remote control from any connected room Supports protected content such as Blu-ray and DRM Plug-and-play connectivity for simplified setup and operation

Available Only at these 16 Locations