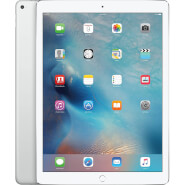 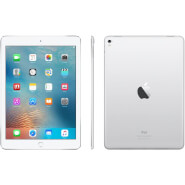 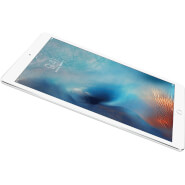 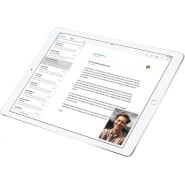 Powering the 9.7" Retina display is the Apple A9X chip with a M9 motion coprocessor. The 3rd generation 64-bit chip can pump out desktop-class CPU performance and console-class graphics. The faster performance allows you to multitask with ease, using iOS 9 features, such as Picture in Picture, Slide Over, and Split View. Also, the iPad Pro is capable of playing three simultaneous 4K video streams in iMovie. The iPad Pro also features 32GB of storage.

The rear 12MP iSight camera has an f/2.2 aperture and a True Tone flash. It can shoot Live Photos and 4K video as well as Full HD 1080p slow-motion video and panoramas up to 63MP in size. The 5MP front-facing camera allows you to FaceTime in HD with friends and family.

The iPad Pro comes with iOS 9 installed, which features proactive assistance as well as powerful search and improved Siri features, all while protecting your privacy. There are the aforementioned multitasking features for iPad, which allow you to use multiple apps simultaneously, as well as improvements to built-in apps. The Notes app has been redesigned, the Maps app gives detailed transit information, and the News app adds another way to keep up with the times. The foundation of iOS is even stronger, with software updates that require less space to install and advanced security features to further protect your device.

While the Retina Display of the iPad Pro features multi-touch capabilities, Apple does offer an alternative ways of interacting with the iPad Pro. The Apple Pencil is an optional accessory that can capture twice as many data points as your finger for greater precision. Force and tilt sensors transmit precise information to the iPad Pro, so you can intuitively lay down lines of varying thickness and opacity. The Smart Keyboard is another optional accessory that connects to the Smart Connector on the iPad Pro, which means you don't have to use Bluetooth. The Smart Keyboard has Apple's dome switches for precision typing.

Within the 9.7" LED-backlit touchscreen, the 2048 x 1536 native resolution renders text and images at 264 pixels per inch and a total of over 3.1 million pixels. The display uses a bonded design, which eliminates gaps between layers, along with the internal reflections caused by those gaps. This results in richer colors, greater contrast, and sharper, more vivid images. The display also features a fingerprint-resistant oleophobic coating to keep your screen clean. With its DCI-P3 color space, the display provides a wider color gamut than standard sRGB displays.