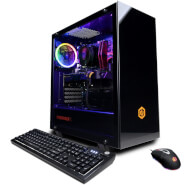 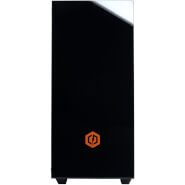 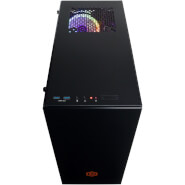 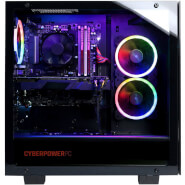 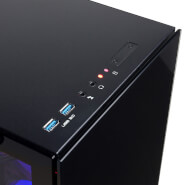 The CyberPowerPC Gamer Master Desktop Computer is a ready-to-use gaming system with the performance and aesthetics to match. Specs-wise, it's equipped with a 3.6 GHz AMD Ryzen 5 3600 Six-Core processor, 16GB of DDR4 RAM, a 500GB M.2 NVMe PCIe SSD, and a 1TB 7200 rpm HDD. The dedicated NVIDIA GeForce RTX 3060 graphics card features 12GB of GDDR6 VRAM. With these combined, this system can quickly boot and load applications as well as play graphically demanding games at 1080p. The RTX 3060 also allows you to take advantage of real-time ray-tracing and DLSS. Other integrated features include Wi-Fi 5, Gigabit Ethernet, HDMI and DisplayPort outputs, and multiple USB and audio ports. The operating system installed is Windows 10 Home and it comes with an RGB USB keyboard and mouse so you can get started as soon as possible; you'll just need a monitor (sold separately).

This system is built within an Onyxia black mid-tower case and has a 600-watt power supply. Moreover, it features a tempered-glass side panel and custom RGB lighting.

If you're going to play online multiplayer games, you'll need a faster internet connection. This CyberPowerPC desktop computer offers Wi-Fi (802.11ac) as well as a Gigabit Ethernet RJ-45 LAN jack so you'll be able to have fast, wired or wireless internet access.

Included are a USB RGB gaming keyboard and mouse so you can start gaming as soon as you set up your computer. All you need is a monitor (sold separately).