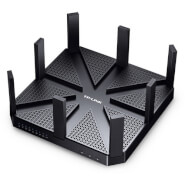 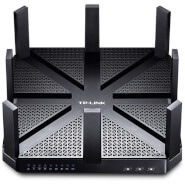 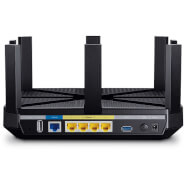 Utilizing both Advanced NitroQAM and 4-Stream technologies, the Archer C5400 Tri-Band MU-MIMO Wireless AC5400 Gigabit Router from TP-Link is capable of achieving combined wireless data transfer rates of up to 5334 Mbps. Combine the enhanced data transfer rates with the ability to connect to any of three wireless frequencies, one 2.4 GHz and two 5 GHz frequencies, and users can connect to the least congested band for optimal network performance. TP-Link has even incorporated their own Smart Connect technology right into this router to automatically connect devices to the band best suited for their network activity ensuring bandwidth is allocated properly giving all clients a high quality network experience.

Archer C5400 delivers combined Tri-Band Wi-Fi speeds to 5334 Mbps, letting you dedicate an entire band to gaming without slowing down your network. Smart Connect helps devices run even faster by assigning them to the best available channel to balance network demand.

When you connect a device to your router, Smart Connect will automatically identify the best available channel and assign the device to it. It is true that piling too many devices on one band might reduce its performance, as a result Smart Connect technology allows your router to automatically choose the most efficient device so that every device is able to reach its full potential.
Your router will create a single, unified SSID (network name) that you can log into using a single password. All you have to do is log into one network one time, then the router does the rest, automatically giving each device access to every band and assigning it to the best one. But this doesn't mean that you've lost all control over the way devices are assigned and reassigned on the network. The user-friendly web portal allows you to see which devices are on each band at any point in time and manually move to whichever band you prefer.
Smart Connect relies on an advanced algorithm that not only automatically determines which band is best for each device, but also constantly monitors the overall status of each device to determine if and when a particular device would benefit from being automatically reassigned to a different band.

Tri-band Wi-Fi combats overcrowding, and all of its unfortunate effects, by creating an additional connection on the 5 GHz band, with wireless speed of up to 1300 Mbps. This means that your router will simultaneously establish three separate connections, one on the 2.4 GHz band and two on the 5 GHz band. As users begin to rely on their wireless network more every day and continue to connect more wireless devices than ever before, the workload can be spread out to reduce competition and congestion. To keep things as simple as possible and ensure that you will get the best performance from your tri-band network, each router comes equipped with Smart Connect technology. This helps devices achieve optimal performance by assigning them to the best available channel and effectively balancing network demand.

The Archer C5400 gets a performance boosts of up to 25%, thanks to NitroQAM (1024-QAM) and 4-Stream. These advanced technologies allow the router's 2.4 GHz band and both of its 5 GHz bands to provide speeds of up to 1000 Mbps and 2167 Mbps, respectively. With NitroQAM and 4-Stream, you can game at the highest settings without lagging.

The Archer C5400 does more than just create faster Wi-Fi, it helps your devices achieve optimal performance by making communication more efficient. With MU-MIMO technology, the Archer C5400 can provide four simultaneous data streams, allowing all connected devices to achieve speeds up to 4X faster than standard AC routers.
The traditional Wi-Fi routers with Single-User MIMO serve only one user at a time while other users that rely on that connection are forced to wait, which diminishes performance and overall capacity. This effect is even stronger when more than one user attempts to access multi-media content, such as HD video. MU-MIMO solves this problem by creating 3 simultaneous connections to serve several users with 3 data streams at the same time. With technological development MU-MIMO can provide more spatial streams and serve more users simultaneously.

Eight antennas with Beamforming technology detect the locations of your connected devices and concentrate wireless signal strength toward them. This makes all of your connections more efficient and stable, improving network performance, even in medium-sized offices and public cafes.

External hard drives can connect directly to the Archer C5400 via its USB 3.0 and 2.0 ports, making it easy to share large files, photos, music and video across your network. To help your wired devices achieve peak performance for smooth gaming and streaming, the four Gigabit Ethernet ports operate 10x faster than standard Ethernet.