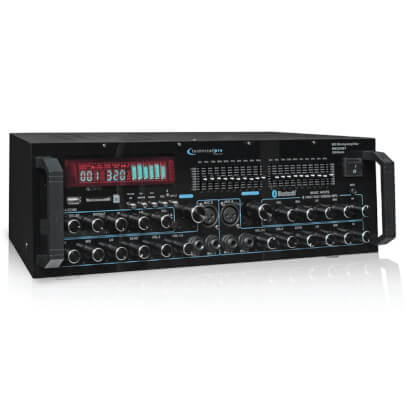 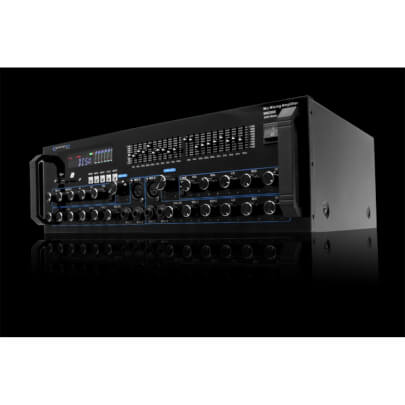 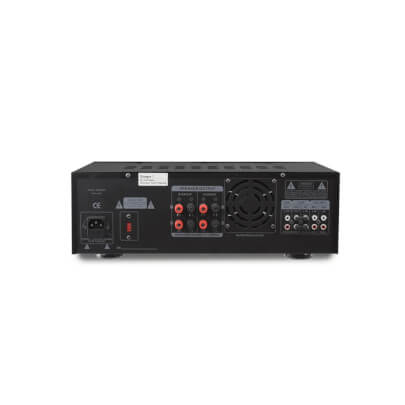 The MM2000BT is a mic mixing amplifier ideal for audio professionals and sound engineers looking to consolidate equipment while maximizing sound and quality. As a mic mixing amplifier MM2000BT is fitted out with a variety of features that make it the ideal amplifier to accompany a vocal heavy setup. For standard shorter mic connections, the MM2000BT comes fitted out with four different 1/4” (unbalanced) mic inputs as well as two XLR (balanced) inputs to accommodate longer connections. For outputs, the MM2000BT comes with 2 channels both equipped with standard banana binding output terminals.

To enhanced output, the MM2000BT features an expanded set of controls that allow for user fine-tuning of output. The 1/4” inputs come with two volume knobs controlling inputs 1-2 and 3-4 while the XLR inputs come with two separate volume knobs controlling output from each input. The mic inputs are also divided into two channels that come with hi, mid, low, and echo controls. The echo can be further adjusted via the echo controls which allow you to control five different aspects of the feature.

As a power amplifier, the MM2000BT sports a whopping peak output of up to 2000 Watts. This high peak output helps accommodate more powerful passive speakers while safeguarding sound quality during its journey from source to speakers. In addition, the MM2000BT boasts 355 RMS watts per channel to ensure connected speakers consistently pump out vibrant, full-bodied sound.

To connect music and other line inputs, the MM2000BT also functions as a multi-purpose audio receiver. It comes with an integrated tuner that allows you to stream music directly from the radio. To connect smartphones and other music storage devices, the MM2000BT also comes with wireless Bluetooth compatibility as well as an Aux input. Music can also be streamed via the front facing USB port and SD card reader.

The MM2000BT also comes equipped with features that help enhance sound quality. To fine tune audio to match any input and setting, the MM2000BT comes with dual 10-band equalizers that allow you to boost and cut output for a cleaner sound. Music inputs also come with high, mid, and low, controls, as well as a balance knob. After creating the perfect sound you can even record it to SD Cards and Flash Drives via the recording capabilities.

The Latest on Audio