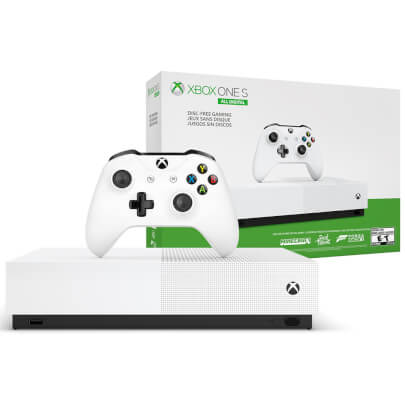 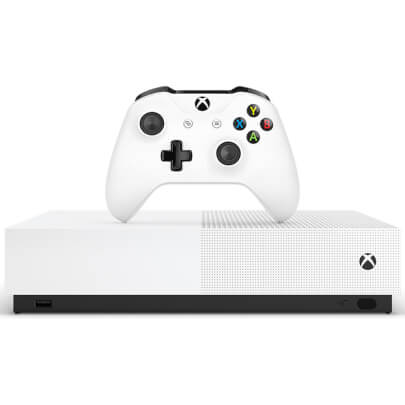 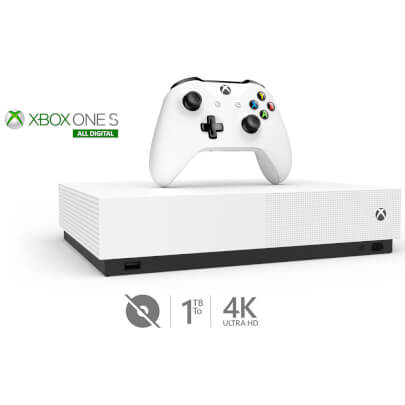 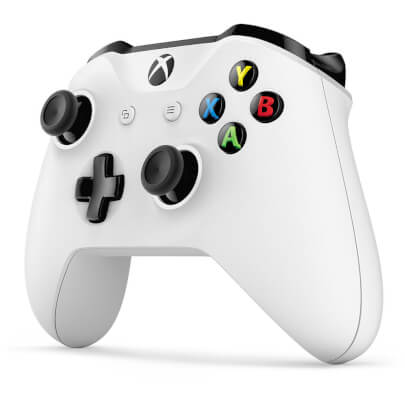 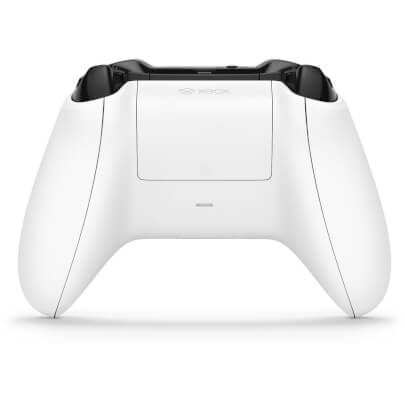 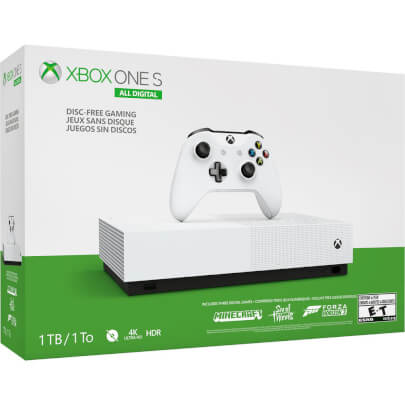 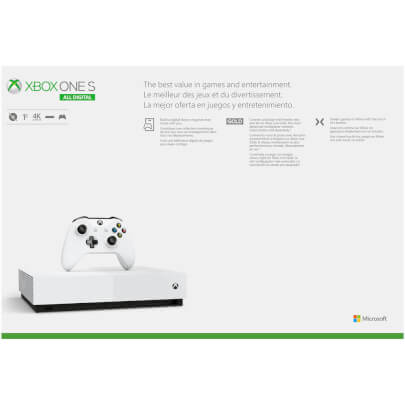 The Xbox One S isn't just slimmer and sleeker. It also has some added features for video and gameplay. You'll be able to stream video in 4K via content providers, such as Netflix and Amazon Video. The Xbox One S also supports High Dynamic Range (HDR) support for video and gaming, so you can experience rich, luminous colors in games, such as Gears of War 4 and Forza Horizon 3. With a higher contrast ratio, HDR brings out the visual depth of your games and media.

Microsoft shifted one of the three USB ports, the pairing button, and an added IR blaster to the front of the Xbox One S for better accessibility. To achieve its compact size, Microsoft had removed the dedicated Kinect port found on the original Xbox One. You can still use the Kinect with the Xbox One S, but you'll have to buy the Xbox One Adpater for USB connection in order to do so.

The Xbox One S also comes with a redesigned Xbox One Wireless Controller. It features a textured grip for enhanced comfort. The Xbox Wireless signal performance has been improved to ensure a reliable connection to the console and up to twice the wireless range. To enable an easier wireless connection to your Windows 10 devices, Microsoft also added Bluetooth support*. The redesigned thumbstick design significantly reduces wear to help maintain accuracy and smooth rotation over the life of the controller.

An Xbox Live Gold subscription is required for access to online multiplayer features.

Please note that the Xbox One S All-Digital Edition does not play physical discs.

With the Xbox One S All-Digital Edition, you can pre-install your digital games so you can play as soon as they are launched. Your digital content travels with you so you can play your games on any Xbox One while logged in on your account. That's because your games, saves, and backups are safe in the cloud. Since the Xbox One S All-Digital Edition does not have a Blu-ray disc player, you won't be able to play any physical discs.

Now connect with players across Windows 10, Xbox One, virtual reality, mobile devices, and Nintendo Switch (coming soon) with this version of Minecraft. Easily find massive multiplayer servers and play with thousands of other players. There are also added features for Xbox One players, like infinite worlds, recipe book, and the marketplace. This game comes with the Update Aquatic.

Customize your pirate and form a crew to voyage to treasure-filled islands. Explore the vast ocean where every sail on the horizon means a ship filled with real players, who may be friends or foes. Face legendary creatures, like the Kraken, and test your mettle in epic ship battles against other pirates.

In Forza Horizon 3, you're in charge of the Horizon Festival. Customize everything, hire and fire your friends, and explore Australia in over 350 cars. Make your Horizon Festival a celebration of cars, music, and freedom of the open road. How you get there is up to you.

The Xbox One S allows you to stream 4K content from partners, such as Netflix and Amazon Video.

With High Dynamic Range (HDR) support for video and gaming, the Xbox One S allows you to experience richer, more luminous colors in games, such as Gears of War 4 and Forza Horizon 3. With a higher contrast ratio, HDR brings out the visual depth of your games and media.

The Xbox One S is 40% smaller than the original Xbox One. It also includes a built-in power supply and can be placed horizontally or vertically with an optional stand.

With an integrated IR blaster in the front as well as an IR Out in the back, the Xbox One S can control your TV and cable box like a universal remote.

The redesigned white Xbox Wireless Controller features textured grips for enhanced comfort. The Xbox Wireless signal performance was improved to ensure a more reliable wireless connection to the console and up to twice the wireless range when used with Xbox One S. To enable easier wireless connection to your Windows 10 devices, Microsoft also added Bluetooth support. The redesigned thumbsticks significantly reduces wear to help maintain accuracy and smooth rotation over the life of the controller.

Connect your cable or satellite box to your Xbox One S and watch your favorite shows with the OneGuide. HDMI pass-thru enables you to watch TV through your Xbox, which makes switching inputs a thing of the past.

With 8GB of RAM and a 1TB hard drive, the Xbox One S gives you plenty of memory for your games, demos, movies, apps, music, and more.

The Xbox One S system software uses a significant amount of storage, which means less internal storage will be available to users.

Xbox Live ensures next-generation gaming and performance for the millions of gamers around the world. Online multiplayer experiences come to life with cloud-powered artificial intelligence creating epic experiences each time you play. And because every game is hosted by servers, host advantage, and player drops and ping times should be much improved.

Games with Gold Offer is for paid Xbox Live Gold members only, which means an active Xbox Live Gold membership is required to play downloaded Xbox One games. Each participating game (selected by Xbox) available for download from Xbox Store during specific window; available games may vary by country. Some titles may only be available for download by adult account holders 18+. Kinect and/or hard drive required for some games. Offer available in all Xbox Live countries where Xbox Live Gold memberships are supported. Offer is non-transferable, not redeemable for cash, and cannot be combined with any other rebate or offer. Offer terms and availability subject to change. Taxes, if any, are the sole responsibility of member. Download charges may apply as set by your ISP.

Now you can play a growing number of Xbox 360 games on Xbox One. Experience both generations of games on one console, with advanced features like Game DVR and in-home streaming to Windows 10. Keep all your game saves, add-ons, and hard-won achievements from Xbox 360. And with your Xbox Live Gold membership, you can even play multiplayer games and chat with friends across Xbox One and Xbox 360. Plus, Games with Gold titles for Xbox 360 are now playable on Xbox One, giving you more free games to play every month when you own an Xbox One. Please visit the official Xbox website for more information.

Get more from games and entertainment with unique cross-screen experiences. With the free Xbox SmartGlass app for Windows 10, Windows Phone, Android, and iOS, you can use your tablet or phone to extend, enhance and control what's playing on your Xbox One S. Plus, the combination of controller, Kinect and Xbox SmartGlass technologies unlock opportunities for developers to bring you more innovative games.

Everyone can have their own personalized Home screen, for instant access to their favorite games and entertainment. Plus, sign into Xbox Live on any Xbox One S, and your Home screen, digital games, content, profile, and saves come to you.

Xbox One S lets you quickly jump from TV to a movie to a game. And then snap them side by side to do two things simultaneously. Music and games. Skype voice calls and live sports. Snap Upload next to the game you are playing to watch clips related to that game.

The Xbox One S supports a variety of apps. Pin your favorites to your home screen. You can also jump between apps instantly or snap them side by side to do two things at once.

Explore the web on your TV with Internet Explorer for Xbox One. Use your voice to browse your favorite sites with ease. Use Bing to find the best of the web. Or use Xbox SmartGlass on your phone or tablet to control your experience.

Available Only at these 12 Locations