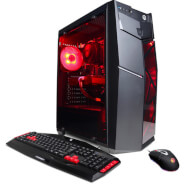 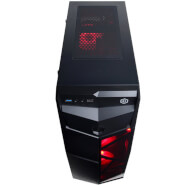 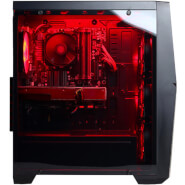 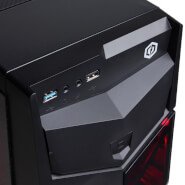 The Gamer Xtreme Desktop Computer from CyberPowerPC is a ready-to-use, custom-built gaming desktop with the performance and aesthetics to match. Powered by a 3.7 GHz Intel Core i5-9600K six-core processor, 8GB of DDR4 RAM, and an AMD Radeon RX 580 graphics card, this system is capable of handling everyday tasks and playing graphically demanding games. To increase its performance even more, you can replace the pre-installed RAM modules and add 16GB ones for a max capacity of 64GB. For storage, it's equipped with a 240GB SSD and a 1TB 7200 rpm HDD. If you need more space, you can install additional storage drives or connect external storage solutions using its multiple USB ports. Other integrated features include a Gigabit LAN jack, 802.11ac Wi-Fi, DVI, HDMI, and DisplayPort outputs, and multiple audio in/out jacks. The operating system installed is Windows 10 Home, and it comes with a USB gaming keyboard and mouse so you can get started as soon as possible.

This system is housed in a CyberPowerPC Azza 221S mid-tower case, which features a tempered glass side panel and has a 450W power supply.

If you're going to play online multiplayer games, you'll need a faster internet connection. This CyberPowerPC desktop computer offers a 10/100/1000 Mb/s Gigabit Ethernet RJ-45 LAN jack as well as 802.11ac Wi-Fi, so you'll be able to have fast, wired or wireless Internet access that is also reliable.

This system comes with a USB RGB gaming keyboard and mouse so you can start gaming as soon as you set up your computer. All you need is a monitor (sold separately).

Start Menu After its hiatus in Windows 8, the Start Menu has returned. Utilizing a combination of the traditional menu system and Windows 8's Live Tiles, the improved Start Menu gives you more information at a glance, showing notification information alongside your applications and other pinned items.