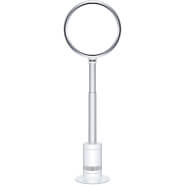 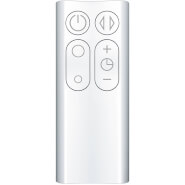 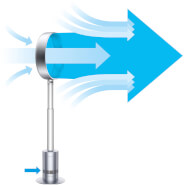 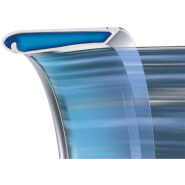 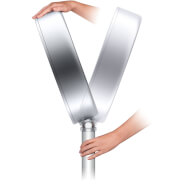 Instead of blades, Dyson's AM08 Pedestal Fan uses patented Air Multiplier technology for powerful airflow projection. Air is accelerated through an annular aperture, drawing in surrounding air to project a high-velocity jet of air&#0151and with no blades, the airflow is smooth, not choppy. Dyson engineers developed this model to be 35% quieter and more energy efficient, using streamlined air channels to reduce airflow turbulence so that air passes through the machine more quietly and efficiently. The addition of a sleep timer enables you to program the fan to turn off after preset time periods ranging from 15 minutes to nine hours, and the remote control makes it easy to control the 10 precise airflow settings and smooth oscillation.

Air is accelerated through an annular aperture, creating a high-velocity jet of air. This passes over an airfoil-shaped ramp, channelling its direction and creating areas of low pressure behind and around the fan. The change in pressure forces surrounding air to be drawn into the airflow, resulting in a powerful stream of smooth cooling air.

Fan can be programmed to turn off after preset intervals ranging from 15 minutes to 9 hours.

With 10 precise airflow settings, sleep timer, on/off and oscillation control. Curved and magnetized to store neatly on the machine.

By reducing turbulence within Dyson Cool™ fans, Dyson engineers were able to make them quieter. To do this, they streamlined the airflow paths within the machines, allowing air to pass through smoothly. They also designed a Helmholtz cavity for each fan, which captures and dissipates sound from the motor.

Reducing turbulence makes the fans quieter, but it also means that less energy is required to move air through them. While the fans still produce powerful airflow, their motors are calibrated to run more slowly, drawing less energy.

No awkward saftey grilles or blades.

The Latest on Housewares

Check Availability for Dyson AM08

Check Availability for Dyson AM08