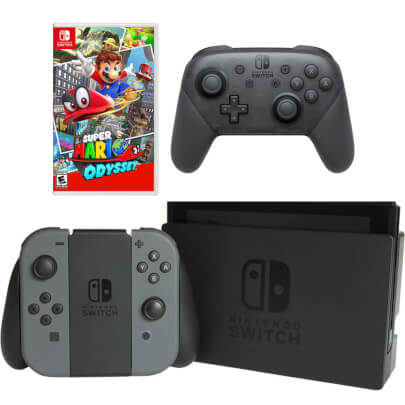 The Nintendo Switch console replaces both home and portable components for a seamless experience, docking with your television or standing alone on a tabletop for outdoor action on its 6.2-inch screen. This Nintendo Switch console includes the Joy-Con detachable controller and can link with other units for multiplayer adventures.

Embark on a cap-tivating, globe-trotting adventure

Explore incredible places far from the Mushroom Kingdom as you join Mario and his new ally Cappy on a massive, globe-trotting 3D adventure. Use amazing new abilities—like the power to capture and control objects, animals, and enemies—to collect Power Moons so you can power up the Odyssey airship and save Princess Peach from Bowser’s wedding plans!