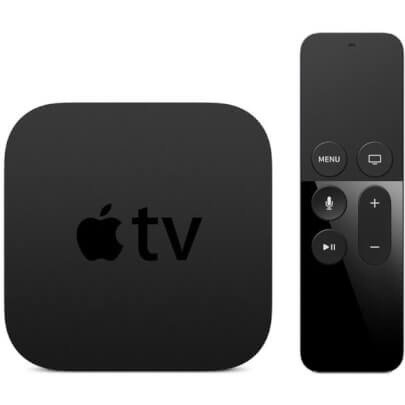 Access a wide variety of streaming content with the 4th generation 64GB Apple TV. With on-board iTunes and iCloud integration, the Apple TV allows you seamlessly enjoy your existing library of music, photos, and videos. You can also explore additional content such TV shows, movies, and games thanks to the integrated App Store. With streaming apps like Netflix, Hulu, MLB, and HBO NOW, you can enjoy an array of multimedia content. Internet access is enabled by built-in 802.11ac Wi-Fi and Ethernet connectivity. Additionally, Apple AirPlay connectivity allows you to wirelessly mirror content from compatible Apple devices such as iPhones, iPads, and Macbooks.

With Siri, you can quickly search for a movie or TV show across popular services, including content apps such as iTunes and Netflix. All your viewing options are displayed on the screen, so you can see where a movie or show can be found. You'll also see if it's available to rent, buy, or watch with a subscription. Dual microphones allow Siri to hear your commands clearly, even if there's background noise.
You can also ask Siri to show sports scores, control playback, pull up the weather, access settings, and even check stocks. Tell Siri to turn on Enhanced Speech, which boosts dialogue and softens music and sound effects for late night viewing. Or if you can't understand a line from a show, ask "What did she just say?" and Siri will skip back and temporarily turn on closed captioning, so you can see what you missed.

The Siri Remote has a glass Touch surface, so you can use your thumb to swipe, scroll, select, and easily navigate around your screen. Simply click anywhere on the glass Touch surface to make your selection. Instead of using traditional fast-forward or rewind buttons, just swipe across the timeline and use the preview frames to pinpoint where you want to go. Every move you make on the remote's Touch surface is mirrored on your television screen. As an added convenience, the Siri Remote can control the volume on your TV or A/V receiver.

The user interface in Apple TV has been redesigned to put content at the forefront. Double-click the Home button on the remote and you'll see the apps you've used most recently, allowing you to easily switch between apps like Showtime, MLB, and iTunes. You can also move most-used apps to the top row of the Home screen for faster access.

Through apps, the Apple TV gives you access to a wide variety of entertainment content like Netflix, Hulu, iTunes, HBO NOW, SHOWTIME, NBA, NHL, MLB, and more. You can also find college and professional sports, breaking news, weather, kids' activities, educational programming, music concerts, and more. You can even subscribe to HBO and SHOWTIME directly from the Apple TV without a cable or satellite subscription.

A vast gaming library awaits you in the Apple TV App Store, offering titles such as Rayman Adventures, Shadowmatic, and Guitar Hero. The Siri Remote doubles as a dynamic game controller, with the Touch surface acting as a virtual directional pad. It even has a built-in accelerometer and gyroscope. There's a Remote Loop option, sold separately, to keep your remote tethered during gameplay. For enhanced gaming control, the Apple TV also supports separately available MFi-based controllers.

Listen to over 30 million songs, including your complete personal music collection, directly on your television. Furthermore, watch behind-the-scenes videos posted by your favorite artists on Connect.