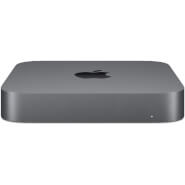 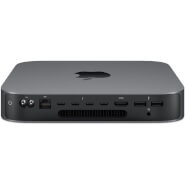 This Mac mini is powered by an 8th Gen Coffee Lake 3.0 GHz Intel Core i5 Six-Core processor that features a burst speed of up to 4.1 GHz, while 8GB of 2666 MHz DDR4 RAM helps to ensure smooth multitasking and also allows the computer to quickly access frequently used files and programs. The system memory can be upgraded to a maximum of 64GB.

Integrated Intel UHD Graphics 630 delivers a sharp, clear picture, and you'll be able to output video to an external display using the system's Thunderbolt 3 ports, which feature native DisplayPort output, or use the built-in HDMI 2.0 port. Up to three 4K displays are supported between any two Thunderbolt 3 ports and the HDMI port, or you can connect one 5K display and one 4K display.

For storage of your files, this Mac mini is equipped with a 512GB PCIe SSD that has a sequential read speed of up to 3.4 GB/s. If you want to add external peripherals, four Thunderbolt 3 ports support bi-directional transfer speeds of up to 40 Gb/s, while also supporting 10 Gb/s USB 3.1 Gen 2 (USB 3.1), device charging, and an external GPU. Thanks to two 5 Gb/s USB 3.1 Gen 1 (USB 3.0) Type-A ports, you'll still be able to connect other devices to this system. Gigabit Ethernet is built in for wired networking, or use dual-band Wi-Fi 5 (802.11ac) for wireless networking. Bluetooth 5.0 technology will allow you to connect additional compatible peripherals, including keyboards, mice, and headsets. Sound is output using a 3.5mm headphone jack. Apple's Mac mini (Late 2018) operates using an internal 150W power supply that runs off 100-240 VAC at 50 to 60 Hz.