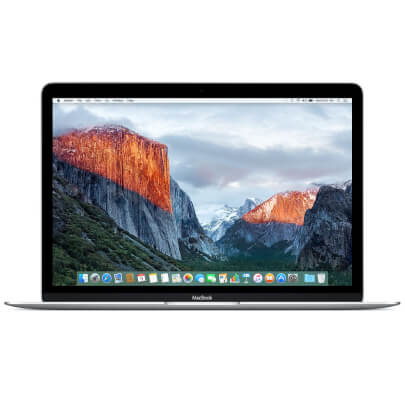 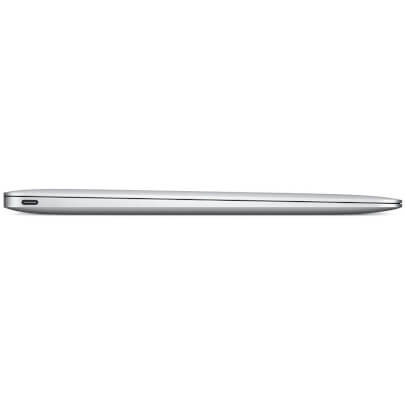 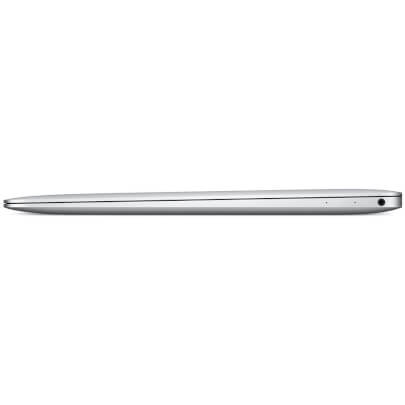 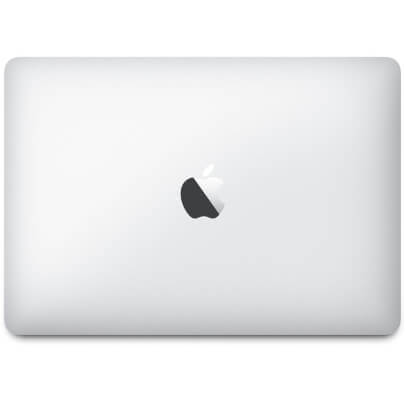 The 12" MacBook from Apple is a slim, compact notebook computer with a premium unibody design. It is loaded with advanced power management features and an integrated battery, which work together to provide up to 10 hours of wireless web browsing. The Intel HD Graphics 515 brings you a smoother, more fluid experience that doesn't compromise on efficiency so you get a longer battery life.

MacBook features sixth-generation Intel Core m3, m5, and m7 processors with speeds of up to 1.3GHz and up to 25 percent faster graphics. It also comes with faster 1866MHz memory. So your MacBook is quicker and more responsive.

With the slim MacBook enclosure, all-day battery life simply would not be achievable using traditional rectangular batteries. So we developed our own battery technology specifically designed to make use of every last millimeter of available space. The result is a terraced, contoured battery design that not only fits perfectly inside the incredibly slim MacBook, but also is unlike anything seen before in a notebook. And now, thanks to more efficient processors and improved battery chemistry, battery life has been extended by an hour.

MacBook has been engineered from the ground up for silent, efficient performance. It includes sixth-generation Intel Core M processors that run on just 5 watts of power, made even more efficient by optimizations throughout OS X. Together the processor and OS X sip so little energy that the system generates very little heat, so no fan is required to cool the computer. That means when your MacBook is working, you won’t hear a thing. And the logic board on which the processor sits has been painstakingly engineered to pack all the capability you expect in a Mac into as little space as possible.

The 12-inch Retina display on the new MacBook isn’t just picture perfect — it’s also paper thin. In fact, at just 0.88 millimeter, it’s the thinnest Retina display ever on a Mac. A specially developed automated manufacturing process forms the impossibly thin edge-to-edge glass that’s only 0.5 millimeter thick. And we reduced the space between display components for a tighter, more integrated design.

To deliver the gorgeous Retina experience on the sleek new MacBook, we had to innovate on every level, right down to the pixel. So we redesigned the pixels to create a larger aperture, allowing more light to pass through. This enabled us to use LED backlighting that’s 30 percent more energy efficient than the Retina display on any other Mac notebook, yet still achieve the same level of vivid brightness.

Each aspect of your MacBook — from the Retina display to the terraced battery to the advanced technologies of OS X — has been optimized to be as energy efficient as possible, with a typical energy consumption of 10.10 kWh per year. It also exceeds the low power requirements set by the EPA, giving it ENERGY STAR 6.1 qualification. And because the MacBook battery requires less frequent charging, it leaves a smaller carbon footprint from day-to-day use.

As long as we were including a port for charging your MacBook, we wanted to make sure it was the most advanced and versatile one available. The USB-C port puts just about everything you need in a port all in one place. This amazing port provides charging, speedy USB 3 data transfer, and video output in a reversible design that’s one-third the size of a USB 3 port, giving you the flexibility to easily connect your favorite devices.

The Force Touch trackpad. Press a little deeper, do a lot more.

The Force Touch trackpad may look like other trackpads on the surface, but underneath it’s unlike anything that’s existed before. Force sensors detect how much pressure you’re applying, and the new Taptic Engine provides a click sensation when you press anywhere on the surface. Now the click that once was a single, mechanical function is just the start of what you can do with Force Touch. The sensory capabilities of the Force Touch trackpad allow you to tell your MacBook what you want it to do based on subtle differences in the amount of pressure you apply. This makes it possible to perform a variety of different actions in different apps, all on the same surface. And it can respond with haptic feedback you can actually feel, making your MacBook more usable and personal than ever before.

Traditional trackpads use a diving board” mechanism, which requires room underneath for the downward motion of a click and makes it harder to click the part of the surface closest to the keyboard. With the Force Touch trackpad, force sensors detect your click anywhere on the surface and move the trackpad laterally toward you, although the feel is the same familiar downward motion you’re accustomed to in a trackpad. The Taptic Engine also provides haptic feedback, so instead of just seeing what’s happening on the screen, you can feel it, too. The trackpad sends a tangible response to your fingertip when you perform certain tasks, like aligning annotations on a PDF.